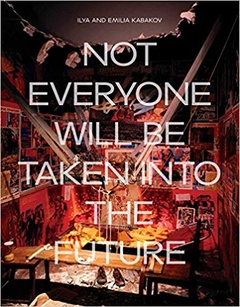 Ilya and Emilia Kabakov. Not Everyone Will Be Taken Into The Future

Russian-born conceptual artists Ilya and Emilia Kabakov are among the most celebrated artists of their generation. Known for their pioneering large-scale environments and installations, the artists’ work fuses the everyday with the conceptual. Deeply rooted in the visual culture of Soviet society yet speaking equally to universal themes, their work is characterized by a sense of melancholia but also by humor.

Celebrating five decades of work, this book traces a line from Ilya Kabakov’s early paintings, drawings, albums, and installations to the collaborative projects made with Emilia following his emigration to the West in 1987. Exploring themes of failed utopia and political disillusionment, as well as fantasies of escape and transcendence, the book also examines the relationship between aesthetics and politics, and the way painting has remained a central feature of their work. Texts by leading art writers and historians contextualize the artists’ practice, amplified by the artists’ own writings. Fully illustrated, this beautiful book introduces newcomers to these important, innovative artists, and serves as a key reference for those already familiar with their work.