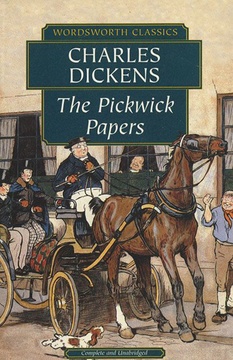 «The Pickwick Papers» was Dickens`s response to his publisher`s request for a monthly series of sporting sketches. It became the most famous of all pre-Victorian novels. The central characters, Mr Pickwick and Sam Weller, have been part of the popular consciousness for over 150 years, and there are over a hundred other speaking parts. The action is set in the late Georgian period of the writer’s earliest youth, drawing on experience and acute observation ranging from the unreformed election at Eatanswillto the horrors of the debtors` prison. Brilliantly comic, it also exposes social and especially legal abuses, as in the notorious trial of Bardell v. Pickwick. Dickens`s satire is both topical and timeless.